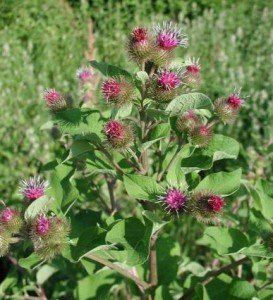 Other Scientific Names: Two introduced species in BC: Arctium lappa, A. minus.

Impacts:
Agricultural: Intolerant of cultivation; not a problem in crops. Invades pastures and hayfields. Livestock eat common burdock but the foliage can impart a bitter taste to the milk. Burs can become entangled in the fleece of sheep reducing quality and value.
Ecological: Because of its biennial growth habit, common burdock is often confined to areas that are not severely disturbed on an annual basis.
Human: Common burdock is regarded as poisonous because of its diuretic effects.

Status and Distribution: Present in all CIPC Regional Districts; widespread in Capital and Strathcona, common in Comox Valley, Cowichan Valley and Nanaimo, limited in Alberni-Clayoquot, Powell River and Mount Waddington. Most common in CDFmm and CWHxm, present in CWHvh and MHmm. Common along the Cowichan River.