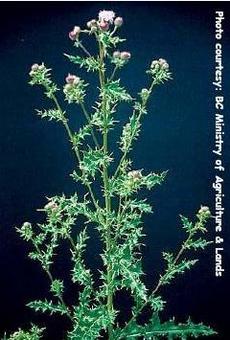 Canada thistle (Cirsium arvense) is an aggressive invader in crops, pastures, rangelands, roadsides and river banks. It spreads quickly vegetatively and by wind-borne seeds. Each plant can produce 1500 seeds.

Canada thistle can be identified by its prickly leaves that are similar to holly. It can be distinguished from other thistles because it grows in dense patches, has relatively small seedheads, and has leaves that are not deeply lobed.

Agricultural: Infests crops, pastures, rangelands, roadsides, and riparian areas.
Ecological: Spreads rapidly from rhizomes that give rise to shoots. Its root system can grow up to 5.5 m annually but usually patches spread about 1-2 m per year. Can form dense patches and virtual monocultures.
Human: Thickets of prickly foliage can restrict recreational access to infested areas.

Repeated mowing can be used to help control Canada thistle by reducing seed set and weakening the plants. Biological control can be an effective method for controlling Canada thistle. Biological control involves the release of predators (usually insects) that attack a target plant to weaken it. These insects are carefully screened by Agriculture Canada to ensure that they only attack the target plant and no other plant species. For more information on biocontrol, see http://www.agf.gov.bc.ca/cropprot/bioweed.htm . The gall fly, Urophora cardui, feeds on the stem of Canada thistle in its larval stage and has established in the region with limited success. The weevil Larinus planus feeds on the flower head, reducing seed production.