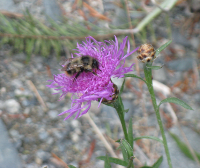 I –  CIPC News and Updates

The field season is coming to a close in the CIPC Service Area – Strategic Group, Iverson Forest Management, Capilano Highways Services Company and Sprout Lake Forestry were the successful bidders this summer, charged with conducting inventories, treating (mechanically and with the use of herbicides) and monitoring invasive plants in the South, Central and North reaches of Vancouver Island, and the Sunshine Coast. With over 200 sites to treat per invasive plant management area (IPMA), contractors are constantly making on-the spot decisions on how to best manage infestations and hit the most sites in one day. With three out of four companies returning for the second year, crews have become familiar with the sites and infestations. Returning contractors ensures greater efficiency in locating sites and satisfaction, especially when sites can be checked off the list once infestations are gone. Look out for results of the season in the November issue of E-News.

The focus was on Knotweed, Hogweed and Broom, and next steps for co-operative invasive species management in the SCRD. Rachelle McElroy presented to 32 attendees, giving information on the impacts of Invasive Plants, outlining the work that is being done provincially, regionally and providing information on specific species and best management practices, including Knotweed. The various options for reporting invasive plants were outlined. Participants had a site tour following the talk to look at Knotweed first hand. 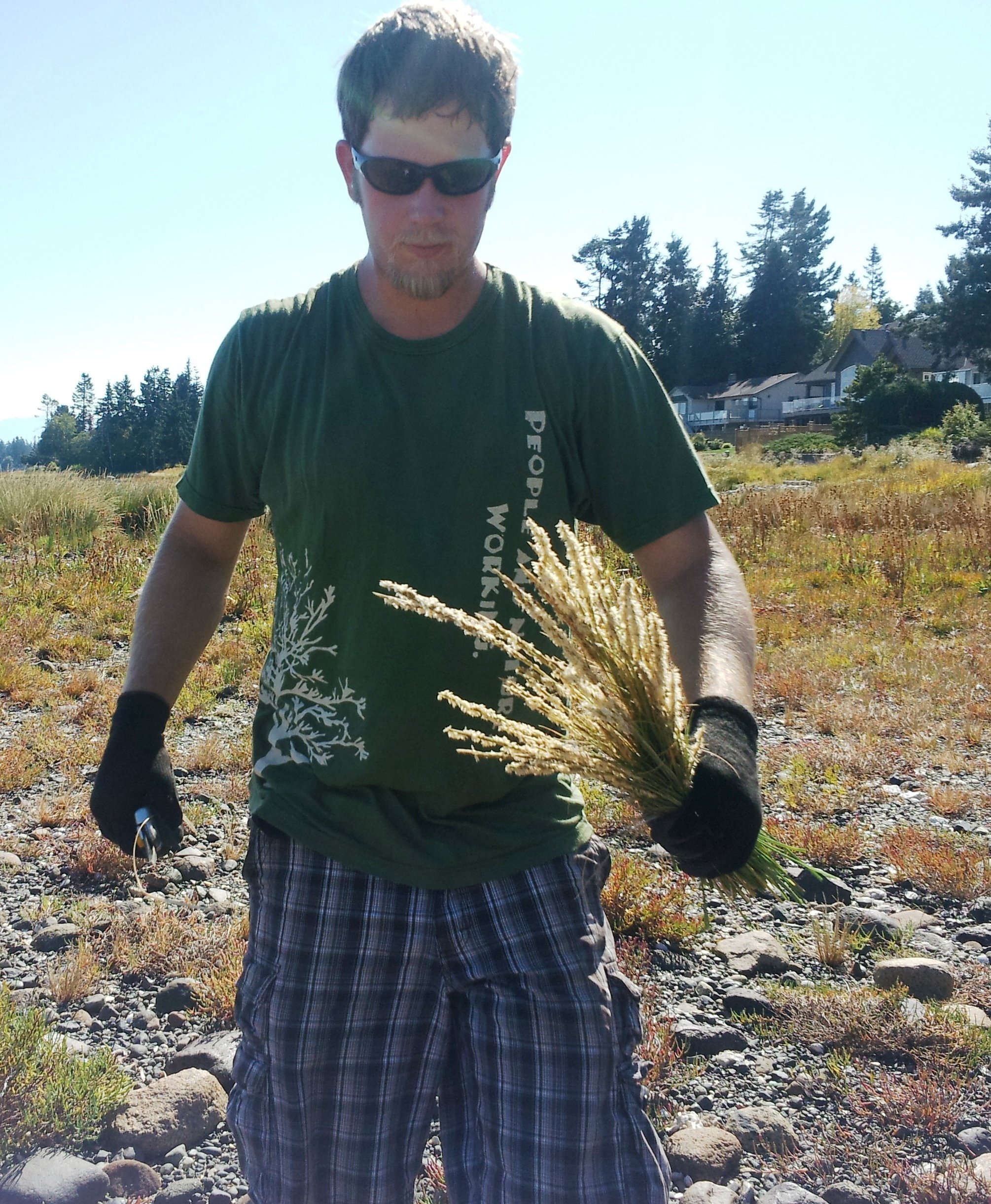 Spartina mapping and eradication field work has begun. This collaborative project involves the CIPC, the Spartina Working Group and the Vancouver Island Conservation Land Management Program (VICLMP). The photo on the left shows a crew member with a handful of Spartina densiflora inflorescence The VICLMP have been involved with the mapping and removal of several Spartina species off Vancouver Island in recent years. This project will pick up where the Conservation Corps have left off for the summer and will focus on Spartina densiflora and Spartina patens, which have been previously identified in the CIPC management area.

Spartina densiflora is an invasive cordgrass orignating on the east coast of South America. This species competes with native flora of tidal marshes and reduces habitat for wildlife. Invasion of mudflats and channel edges of marshes eliminates foraging habitats for waterfowl and may negatively affect shellfish rearing habitat. The mapping and manual removals will concentrate on the Deep Bay mudflats north to Baynes Sound and beyond, as time permits. Click Here for more information about invasive Spartina species in BC. 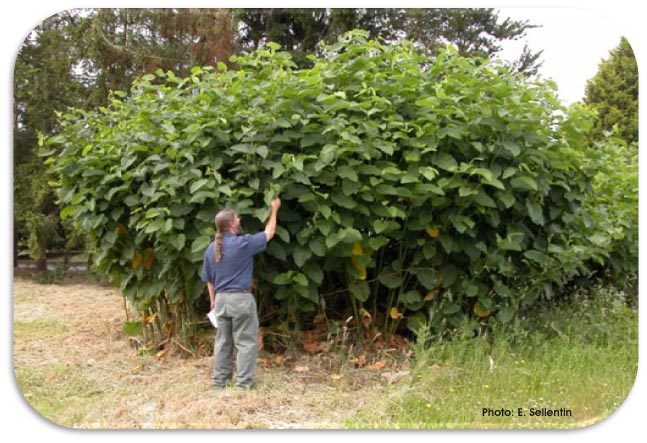 e Capital Regional District (CRD) to be on the alert for invasive knotweed and report any sightings through a regional reporting system.

CRISP, a regional sub-committee of the CIPC, has launched a media campaign on the CIPC website here. It includes a Knotweed Fact Sheet at this time, be on the lookout for more species highlighted.

CIPC’s Name change update – Members voted at the June AGM for the CIPC to make the shift from plants to species. CIPC’s new name, the Coastal Invasive Species Committe (CISC or Coastal ISC) will be officially launched in November. At that time a new logo will be released and the website upgrated. Look out for a special announcement next month!

Sept 29 & Oct 20, 2012. Volunteer for the 11th Annual Mill Hill Broom Sweep. Join up to spend an afternoon removing invasive species at Mill Hill Regional Park on Sat., Sept. 29 and/or Oct. 20. Be part of this science-based and award-winning restoration project, which brings dedicated community volunteers together with CRD Regional Parks staff under the common goal of restoring threatened Garry oak ecosystems. Mill Hill has one of the highest concentrations of plants at risk in the province. It’s a great opportunity to learn about the project results and the experience gained over its 10-year history. Pre-register online here or by calling 250-360-3329.

Oct 24-26, 2012. The Coast Waste Management Association would like to invite you to join them, in Victoria, BC for the conference, “EPR – The (R)Evolution continues” which will bring together waste and recycling professionals to explore leading edge topics that affect the waste management and recycling sector today. Joining us are two renowned professionals; Victor Bell, President of EPI-Global Environmental Packaging & Eric Lombardi, Executive Director of Eco Cycle, to share their perspectives on Extended Producer Responsibility and how we manage our waste. Click here for more information.

Nov. 20-21, 2012. IVMA Bi-Annual Conference, Prince George, BC This 3 day conference will have topics discussing Regulatory and Legal Updates and much more. Many of the topics will be eligible for Continuing Education Credits. Click here for more information.

CIPC’s Education and Outreach Coordinator, Alison Millham recently presented to the Camosun College Horticulture program students. With 22 students in attendance at the Royal Roads Campus, a “Grow Me Instead” presentation was well received. This presentation introduced the concept of invasive plants and focused on select priority species in the Capital Region with native and horticultural alternatives. Students were amazed at some of the negative impacts that these deceivingly beautiful plants can have on the environment and economy. A display of potted invasive plants, including Giant Hogweed, gave students a chance to see some species first-hand. 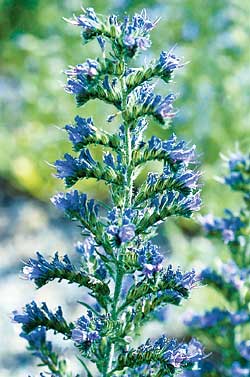 The CIPC recently received a report that Blueweed was in Ladysmith. Education and Outreach Coordinator, Alison Millham responded by mapping the site and adding it to the Invasive Alien Plant Program (IAPP). By quickly coordinating with the Town of Ladysmith, eight flowering plants were hand dug and removed from a local park in the center of Ladysmith.

Blueweed Echium vulgare reports have recently been reported on Southern Vancouver Island, with reports more commonly found in the interior of BC. Blueweed grows 1 to 3 feet tall, has stiff hairs on the stem, which are prickly when touched and have blue flowers. It is listed as regionally noxious in Cariboo, Central Kootenay, Columbia-Shuswap, East Kootenay, Okanagan-Similkameen and Thompson-Nicola Regional Districts.

Region wants help fighting knotweed invasion
By Kyle Wells – Goldstream News Gazette, published: August 28, 2012
It’s a quiet invasion but the Capital Regional District wants homeowners to be diligent in identifying and properly disposing of the invasive species knotweed. The bamboo-like plant – in particular the Japanese, bohemian and giant varieties – is causing problems for waterways and other species of plants. CLICK here to read the full article.
Fresh look at noxious weeds bylaw agreed
By Philip Round, Echo Staff, published August 30, 2012
There’s to be a fresh look at a proposed weed control bylaw before regional district directors go any further with the idea. As first revealed in the Echo, staff had suggested 21 types of plant – some of them popular with gardeners – should be labeled as noxious, allowing action to be taken to eradicate them in the event of complaints. The list included some notorious invasive and problematic species that appear on several provincial and local blacklists, such as giant hogweed and various types of knotweed. Click here to read the full article. 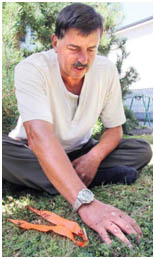 V –  BC and International News

A species of Carp was found by fisherman in the Fraser River in the Lillooet area last week. We are currently waiting for identification of the species found. The potential impacts of certain species of Asian Carp, such as Silver Carp, could threaten our fishery and boater safety. Check out the news story that ran on Global TV News here.

Planting Native Species to Control Site Reinfestation by Japanese Knotweed
(Fallopia japonica) – a research article published in the September 2012 issue of Ecological Restoration – Read more here.
Common Carp Cyprinus carpio has been found in Southern BC including Vancouver Island. The Royal BC Museum’s Aliens Among Us webpage has information on the identifying characteristics, history and impacts of this non-native carp species.
BBC Museum of Life: Discoveries 4/6
This video documentary discusses invasive species including knotweed (at 41:00 in the video)
A Global Compendium of Weeds Its been ten years since the original A Global Compendium of Weeds was published. This new edition is in a similar format, and works in a similar manner.
This edition is just over 200 pages longer than the first (now 1115 pages), but there are over 12,000 additional names listed (33,000+), and more than 1000 new references.
It is free for download here (pdf).

Thank you for your continued support!