Coastal Invasive Species Committee conducted a survey this year to get the public’s perspective on invasive species and to identify any concerns in the community. We had a total of 60 responses, representing 7 regional districts. These are broken down as follows, with the regional district of Nanaimo having the largest representation.

We were interested in how aware people were of the invasive species prevention campaigns used across Canada. Over half of the respondents had never heard of any of the campaigns. The most widely known campaign was Clean Drain Dry, with 35% of respondents aware of it. This could be attributed to the large awareness campaign, signage, and boat inspection stations conducted by the BC government.

Learn more about the prevention campaigns >>> 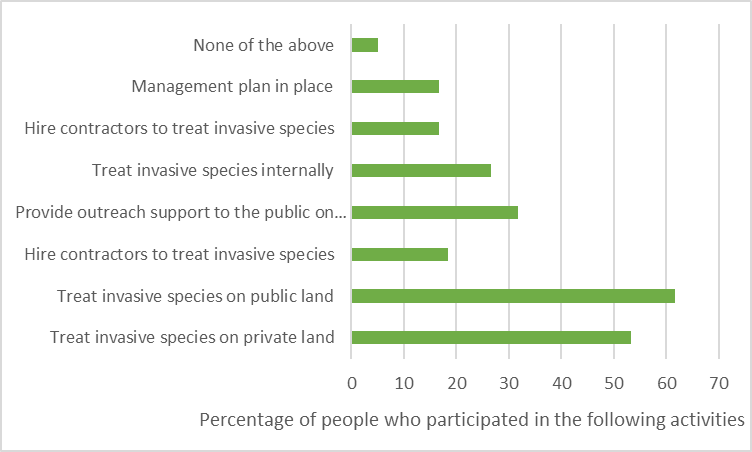 Coastal ISC also wanted to establish what gaps exist in invasive species management. The 3 most highly requested forms of assistance were increasing awareness around invasive species, on the ground treatments, and finally, organizing weed pulls and other volunteer opportunities.

Finally, we wanted to know what species of invasives respondents were most concerned about.

The following species received more than 10 mentions and were of the highest concern.

In terms of new invaders, the majority of respondents were unaware of any new invaders of concern to the area. The new invaders of highest concern included Eastern Grey Squirrels, American Bullfrogs, Wall Lizards, Rabbits, Scotch Broom and Arum italicum. A total of 16 species were identified as new species of concern.