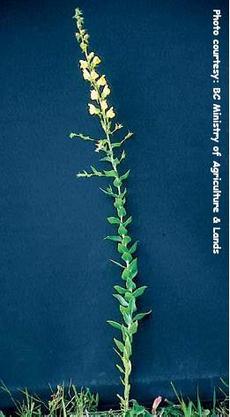 Dalmatian toadflax (Linaria genistifolia spp. dalmatica) is an aggressive invader in the interior of BC and a growing concern on Vancouver Island and surrounding Coastal communities. It was brought to North America as an ornamental species in the late 1800s and has since infested thousands of hectares in BC.

Its yellow snap-dragon like flowers and leaves that clasp a waxy stem make it a popular variety among gardeners. However, its early flowering, prolific seed production and strong root system allow it to form dense thickets that aggressively displace native plants and can be difficult to control.

Small infestations can be removed by hand-pulling each year prior to seed development or herbicide application. However, biological agents are the most effective means of control. Using a combination of the weevil Mecinus janthinus to attack the stem of the plant and the beetle Brachypterolus pulicarius to feed on the flower buds, pollen and seeds, the flower and seed production of toadflax can be significantly reduced. If you have Dalmatian toadflax on your property, you can check for evidence of these insects by looking for black, cigar-shaped beetles in May and June, and looking for small shotholes in the stem of the plant.

Dalmatian toadflax can be found in small patches along roadsides and other open areas throughout Central Vancouver Island, spreading through creeping root systems and seed spread.