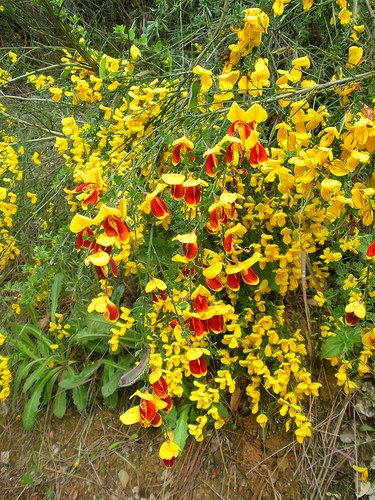 Origin: British Isles and Central and Southern Europe.  Was brought to BC from Scotland in the 1850s as a garden ornamental by Captain Walter Grant who first planted it in Sooke.

Description: This woody perennial shrub grows to 3 meters in height and can be identified by its yellow pea-like flowers with subsequent flat green seed pods which turn brown at maturity. The bright yellow flowers may have a red marking in middle and stems are leathery green.

Reproduction:  Spreads primarily by seed, which can persist in soil for up to 60 years. Over 10,000 seeds can be produced per plant. Seed capsules explode and distribute seeds up to 7 m away from the source plant. Plants typically start producing seeds after three years and
usually live about 17 years, but can survive as many as 25 years.

Habitat: It is typically found in in dry, disturbed sites including fields, meadows, dry riverbeds and roadsides. Broom can remove nitrogen from the air, “fixing it” in the soil. Nitrogen is a nutrient necessary for plant growth. This adaptation allows broom to establish readily on poor soils. As broom is moderately shade tolerant, it can remain as part of the forest understorey as well as thrive in full sunlight.

Distribution: Typically concentrated on Southern BC islands and southern coastal mainland, it can now be found from mid-coast BC (Queen Charlotte Islands) to the interior, with sightings reported in the Kootenays and Castlegar. 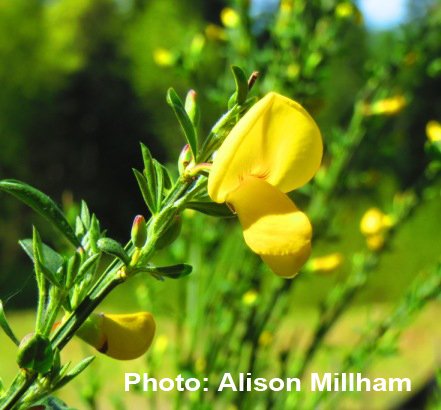 Small seedlings (less than a pencil width) can be pulled when the soil is moist, taking care to not disturb the soil.

Larger plants must be cut down at the base or just below ground height, preferably between March to June, when the flowers are out but have not yet gone to seed.  It is also important to remove cut plant material from desirable areas as these old plant parts will release toxins into the soil that prevent re-establishment of desirable plants.

Field Guide to Noxious and Other Selected Weeds of British Columbia