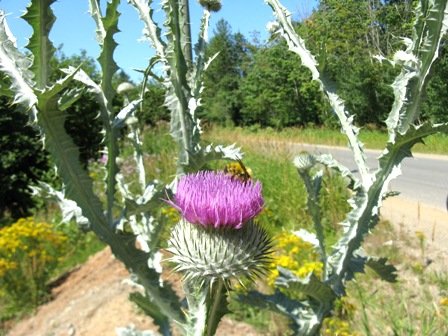 Scotch thistle is an impressive garden ornamental that can grow up to three meters tall! However, the ability of one plant to produce thousands of seeds that can remain viable in the soil for over 30 years makes it an aggressive opponent to even the greenest of thumbs. Scotch thistle is highly invasive and can easily hop the garden fence into native habitat through its windborne seeds.

Origin:  This plant is native to Europe and eastern Asia which was introduced in the U.S. late in the 1800’s. It is said to have saved Scotland from invading Norsemen when nighttime guards were alerted by cries of pain as the attacking army walked through the thistle with their bare feet.

Growth Form / Reproduction: Scotch thistle is a biennial thistle growing to 3 metres in height. Purple flowers grow to 5cm width, with multiple flower heads often present. The leaves are very large ( 60 cm long by 30 cm wide) and irregularly lobed with sharp yellow spikes along the edges. Upper and lower leaf surfaces are covered with a thick mat of cotton-like or woolly hairs, giving the foliage a grey-green colour.

Produces a large, ground-level rosette the first year and a tall, spiny plant in the second year. Flowering occurs from mid-June to September, depending on location.Individual plants can produce 70–100 flowering heads, each containing 100–140 seeds (Young and Evans 1969). Seeds may remain viable in the soil for over 30 years.

Impacts:  The detrimental effects of this species impact wildlife, livestock, field crops and humans. It can grow in dense patches where the sharp spiny stems prevent the passage of animals and humans, restricting access to habitat, food sources and recreational destinations. Since Scotch Thistle is growing in gardens on Vancouver Island and surrounding Coastal communities, there is concern that its impacts may increase as it continues to escape controlled garden environments to invade our natural areas.

A small cluster of plants can either spread immediately or over many years. Because the seeds remain viable in the soil for so many years, patches in your garden may already harbour a large seed bank in the soil below the plant.

Habitat: Status and Distribution: In BC, Scotch thistle is found at low elevations along roadsides and disturbed areas (Douglas et al. 1998). It also grows in irrigation ditches on rangelands and in gardens. The seeds contain a water-soluble germination inhibitor, so it is often successful in moist areas that are adjacent to riparian or areas along stream courses.

Management Strategy: As a resident, you can help control the spread of this invasive species by removing all plants from your property. Plants can be cut, taking care to prevent seed spread, and then the roots dug up. Scotch thistle can re-grow from severed roots, so care must be taken to remove all plant parts from the soil and avoid spreading them through garden waste, dumping, or vehicles.