There are a number of invasive plant species in Coastal BC.
Download our most recent priority list here (PDF – 38KB) 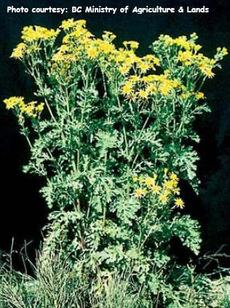 Tansy ragwort (Senecio jacobeae) is a poisonous plant that was likely introduced to North America as a medicinal herb. It has since invaded pastures, woodlands and waste areas throughout the South Coast of BC, including central and northern Vancouver Island.

Tansy ragwort produces a low-growing rosette of leaves in the first year and an erect stem (0.3  1.2 metres high) in subsequent years. The dark green, stalkless leaves are deeply cut into irregular segments, giving the plant a ragged appearance. The daisy-like, bright yellow flowers are visible from July through September, producing more than 150,000 seeds per plant. These seeds can be transported by wind, water and animals. Seeds can remain viable on the soil surface for four to five years and over 20 years if buried. Seeds germinate in both spring and fall to form new rosettes.

Tansy ragwort can reduce available forage by more than 50 percent and can be poisonous to animals (esp. cattle, horses and goats), causing liver dysfunction, photo-sensitivity and sometimes death. Trace amounts of the toxin can have cumulative effects on both animals and humans if long term exposure occurs. The flowers of tansy ragwort contain the highest percentage of the toxin and have been found in dilute form in honey made from bees foraging in areas of high ragwort concentration. Long term consumption of trace amounts of the alkaloids in milk or honey should be observed with caution.

The negative impacts of this plant can be reduced through good land management in combination with effective biological control options and public awareness. If possible, prevent this plant from establishing in an area. Once established, dont permit it to go to seed and maintain healthy forage or other favorable species to promote competition. Existing plants can be treated using herbicides or effective biological control options. The seed head, roots and leaves of tansy ragwort can be attacked by biological agents, such as the cinnabar moth (Tyria jacobaeae), reducing seed production and making the plant less competitive. For more details on control options, see: http://www.agf.gov.bc.ca/cropprot/tansy.htm

Become A Member
Report a Weed
SIGN UP FOR ENEWS